Welcome to our travel blog. We are Tabitha and Nic. In 2011 we 'retired' in our early 40s and set off to travel the world. We spent our first year in South America and have been lucky enough to make two trips to Antarctica.
Our blog is a record of our travels, thoughts and experiences. It is not a guide book, but we do include some tips and information, so we hope that you may find it useful if you are planning to visit somewhere we have been. Or you may just find it interesting as a bit of armchair travel. 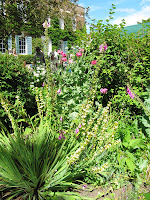 While we were staying in Kent, we went along to one of the local villages' country fair.  It was a traditional style event, but we were pleased to see that the organisers had not succumbed to the notion that adding "Ye Olde" to everything makes it seem more interesting, so instead of being the slightly ridiculous 'Ye Olde Country Fayre', it was the rather more simple and authentic 'Country Fair'. 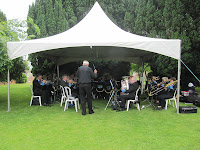 It is held in the grounds of a local farm, next to the village church.   The owners of the farm allow the farmhouse grounds to be turned into tea lawns with a brass band playing while people drink tea and eat cake in the garden.

They had the children from the village school doing the maypole dancing display and the local dance school performing too. 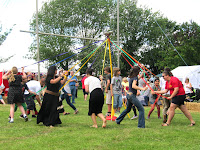 Even the ex pupils weren't safe, as they were hauled up to have a go at the maypole dancing too.  They had obviously learnt to do it as kids, but some were clearly a bit rusty, as the first attempt ended in a bit of a tangle.  They got it together for the second go though and were very pleased with themselves when they reached the end with all of their colourful ribbons in the right places. 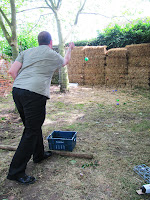 For any readers who are wondering what on earth maypole dancing is, it is a folk dance, traditionally done as part of the mayday festivities, but often seen at country style summer events like this fair.  This version uses a pole with many brightly coloured ribbons attached to the top.

The participants all take a ribbon and dance around the pole, in different directions and ducking under each others' ribbons so that the ribbons are weaves around the pole.  They then do the same backwards to put the ribbons back to how they started.  If it goes wrong, you can end up in quite a tangle. 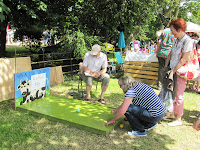 There original version of maypole dancing doesn't include the ribbons, and uses a much larger, garlanded maypole.  This earlier form dates back to the 1300s, and was popular in a number of European countries; it is suggested to have originated as a German pagan ritual, possibly connected to fertility.  The smaller pole and ribbon dance, which is the type seen mostly in England these days, is thought to have been introduced much later in the 1800s. 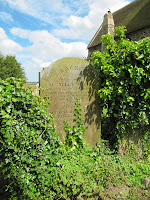 But back to the fair; they had a barbecue, bar and cake sale, as well as some of the typical stands that you would expect to see at an event like this.  We didn't try 'splatting the rat', and we failed miserably on the coconut shy and at rolling the ball through the holes to win a joint of beef. 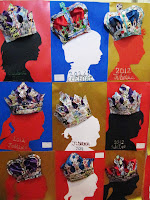 I did win a packet of sherbet flying saucers on the sweetie tombola, but sadly not the wheelbarrow of booze or any of the prizes in the main raffle.

As well as the usual pony rides, there was a chance for the kids - or the adults I suppose - to clamber over a fire engine brought along by the fire brigade to help raise money.  Thankfully the engine and crew only got called away to one actual fire during the afternoon. 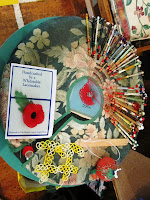 Inside the church, they had various things made by the local school children and a photography competition.  They also had some craft stands, including a display by the local lacemakers. 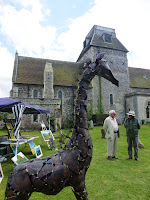 Lace making has always seemed incredibly complicated to me, with all of those bobbins.  In fact I am assured that if you use an easy pattern it is relatively simple, as you only ever focus on four of the bobbins at once.  I rather liked the lace poppies that one of the ladies was making.

In the grounds, alongside the ancient tombstones, there were various artists selling their paintings, as well as some very good metal sculptures.  I could imagine having one of the lilies, or a couple of pumpkins if I had a garden, but I am not sure that many people would feel the need to have a huge giraffe on their lawn! 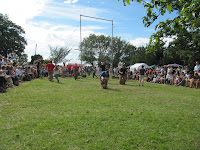 Back at the arena, we had missed the morris dancers, and the games were in full swing.  The dog races were not so much a question of how fast each dog could run, but won or lost depending upon the hound could locate and wolf down its designated sausage, and then be persuaded to run back, rather than continue to hunt around in case there were more to be had.
One event that it didn't do to get too close to was the egg tossing.  As you might guess, this involved the throwing of raw eggs between two partners.  The idea of course being to catch the egg without it breaking.  Easy at first, it got harder, and therefore a lot messier as the distance that the egg had to be thrown over got bigger.  And of course the further apart the throwers and catchers stood, the closer they were to the spectators, so the more likely we wet to get hit by a stray egg, or just splattered in the case of an overly rough catch.

When they got on to the tug-o-war, I have no doubt that there were some who later blamed their loss of footing on the remnants of the raw egg underfoot.  The teams for this traditional test of strength were the locals against 'the rest of the world' or more accurately those who lived just a bit outside of Chislet and were visiting for the fair. 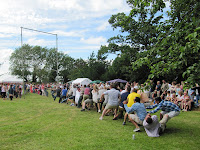 The best of three went to the local side, but by this time it had, as tug o war always does, become something of a free for all, with rather more than the supposed ten on each end, and the people from the St Johns Ambulance on standby. Thankfully, despite some fairly spectacular collapses, no one seemed to do themselves too much damage, though I'm guessing there were a few bad grass stains to be washed out the next day.
The final challenge of the day was to find the 'biggest tosser'.  This was the dubious title to be bestowed upon the person who managed to propel a sheaf - or in this case a sack of straw - over the highest bar, by tossing it with a pitchfork.

The junior version of this attracted various boys and girls, although probably inevitably was won by one of the taller and older boys, who seemed to be effortless in his launching of the sack over the bar. 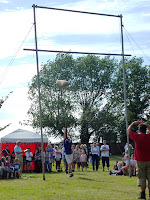 Once it got to the adults though, it became a totally male event.  This was very clearly seen as a proof on manhood by most of the younger men in the crowd.  And as by this time, many of them had visited the bar a few times already, this soon became an event charged with much bravado and testosterone.  Some were very good at it, probably because they had been doing this for years, but it was more amusing to see those who were new to the concept doing battle with their pitchfork and sack.

This was a simple, relaxed day out at a very small traditional event.  It is never going to be on a par with a big show or major event, but sometimes it is nice just to see a slice of real life in a proper community event like this.  It was well organized, but better for not being a slick, rehearsed event like many of the bigger shows are.  This was, quite simply, local people getting together to have some fun and raise some money.  And we enjoyed it.

We like to hear from you too, so please leave us a message here. We are also happy to answer any questions if we can help. Comments are moderated so will not appear straight away and there could be some delay in replying if we are travelling.

Featured Post - a look back at some of our favourite places

Ollantaytambo, Peru After a day of rest in Cusco, Nic and I, plus the other person who came back with us and the one non-trekker, made ou... 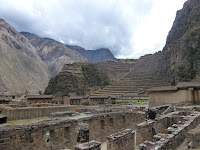 We love to hear from our readers, whether you have a question or just a comment. If you want to get in touch you can leave a message for us on a post, or email us on atwi8000days.gmail.com
We also have a Facebook page at https://m.facebook.com/AroundTheWorldIn8000Days/

As well as the pictures on the blog itself, we are gradually creating some albums of extra photos. You can watch the slideshow below, or if you click on a slideshow it should take you to our Picasa photo albums. We have added to captions to some pictures so that you can see what they are.